The Smoke has Cleared: Looking Back at UofL’s NCAA Run & The Future

Two inches on the rim….

One made free throw….

If either, among many other things, had gone the Cards’ way a few weeks back they would have prepped for an exciting rematch with ACC foe Duke while showcasing the school’s 11th Final Four. But that’s precisely why basketball is indeed a game of bounces and inches. After one of the more improbable NCAA Tournament runs in two decades, the 2014-15 Cardinals gave their fans a reason to again be proud in late March and to never forget just how deadly Rick Pitino can be when the games count the most. The overtime loss to Michigan State was certainly bittersweet following a decisive win over NC State. To be so close at reaching Indianapolis was super tantalizing and seeing Montrezl Harrell, Terry Rozier & senior Wayne Blackshear finish their careers at UofL only added to the agony. On the flip side, numerous college basketball “experts” had the Cards getting bounced in the 1st round but UofL proved the naysayers wrong and laid a solid foundation of momentum for next year’s team.

So let’s take a loser look at that foundation of momentum for a moment, shall we? A LOT has transpired within the Louisville basketball program since the loss to Michigan State: Rozier/Trez have entered the NBA draft, Shaqquan Aaron & Anton Gill have left for greener pastures (or so they hope), and 5th year graduate transfer standout Trey Lewis, a proficient scorer from Cleveland State, has decided to finish his playing career at UofL. With the inevitable departure of Rozier, it was a MUST for Coach Pitino to go out and find another scorer, preferably a guard with some experience who could step right in and help lead next year’s squad.

Lewis dropped 24 points on the Cards back in December. His late addition to next year’s lineup solidifies the likelihood that the Cards will continue to remain highly competitive both in the ACC and the NCAA Tournanent, something all UofL fans wish for and expect annually. But Lewis will not be the only addition to the 2015-16 Cards. Add to the mix a top 5 nationally ranked recruiting class featuring freshmen Donavon Mitchell, Deng Adel, hometown star Ray Spaulding and Ryan McMahon and you essentially have a brand new team, a total makeover that even Bruce Jenner could appreciate. As of this moment, there is also lots of scuttlebutt about a few other individuals who may join the Cardinals fray: Maverick Rowan, a 6’7″ HS junior who is attempting to reclassify and graduate early; Damion Lee, a 6’6″ versatile small forward who is a fifth year transfer from Drexel University (Lee led the Colonial Athletic Association in scoring this past season); and 6’2″ Derryck Thornton, another HS junior looking to reclassify. Thornton is ranked by some recruiting analysts as the #1 point guard in the class of 2016 so if he does indeed reclassify it would be a major get for the Cards. It won’t be easy however as Duke is heavily involved with Thornton as well. Rowan is ranked among the nation’s top 40 juniors and is listed as the top overall player in the state of Florida. Other top tier schools like Wisconsin are also battling for Rowan’s services. 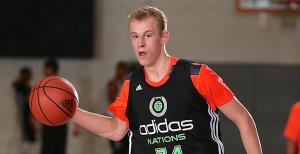 Tonight the annual Kentucky Derby Festival Basketball Classic event takes place in Freedom Hall (oh how I miss thee!). Ryan McMahon, who last night broke the all-time Derby Classic record with a single round score of 26 points in the 3 pt shoot out, will be in the finals. Donavon Mitchell, the Cards top ranked incoming freshman, dazzled folks last night with his dunking prowess and God-given athletic skills, will be in the finals of the slam dunk contest. All four of UofL’s incoming recruits will be playing on the same team and the game will feature several other top recruits, three of which who will be attending Indiana next fall. Interested in checking out the talent? Head on out to Freedom Hall or simply click this this website for ticket information………. http://www.ticketmaster.com/Kentucky-Derby-Festival-Basketball-Classic-tickets/artist/1682177

Ryan McMahon would love to feel the love from Card fans 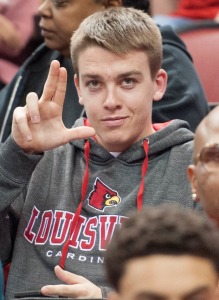 What once looked to be a complete year of rebuilding for UofL Basketball now suddenly looks more like a year of probable reloading. While many fans continue to criticize Rick Pitino for not be able to land, or in many instances even recruit, the nation’s top prima donnas, Louisville continues to build teams that can compete for a run at a Final Four. This year’s incoming recruiting class looks to be populated with high character kids who will be willing to put in the time and effort to be successful on and of the basketball court. If Wisconsin, a football school, can push for a title with zero McDonald’s All-Americans and no one-and-dones then other schools can as well, Louisville most certainly included. The future remains bright for Card Nation. Here’s to hoping the guys get in the gym and weight room this summer and prepare themselves for another season of winning at the highest level.

In the spirit of supporting our ACC brethren, congratulations to Duke University on their 5th National Championship. It’s hard to argue against the greatness the Blue Devils have exuded over the past 20+ seasons. Plus, I enjoy sending them kudos because I know that 99.9% of Kentucky fans despise them.