With the Tar Heels having a week off, and the necessary improvements obvious (defense, consistency and surprisingly, the running game), I thought I would share a project I’ve been working on for a few years. Growing up in the Triangle region of North Carolina, I’ve been an ACC fan my whole life. Even if you move here from somewhere else, you don’t last long before deciding you like Carolina Blue, Duke Blue, or NC State red. Once you do, it’s for life, and you develop a strong feeling about the other colors too…it’s just not usually as positive.

So when I set out to honor the conference I grew up with, I decided there was no better way to do it than by making a custom cornhole set. Fast-forward almost four years, twenty paintbrushes and countless hours later. After adding Syracuse and Pitt, removing Maryland and adding Louisville, it’s finally finished- conference expansion didn’t just affect the leagues! Each board has one of the ACC’s football divisions, which is why you won’t see Notre Dame. You also won’t see Duke’s mascot either for other reasons. It was a lot of fun to make, and hopefully, it will represent the ACC for years to come. Until of course Notre Dame goes all-in, the conference goes division-less and Connecticut, Navy or West Virginia (finally) are added. But that’s for another day.

Has anybody else made their own ACC-related cornhole set? Do you think I should have added Notre Dame anyway? Let us know in the replies. 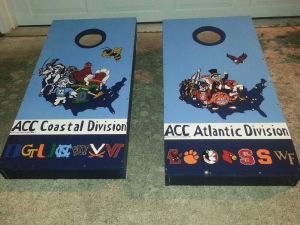