Keepin’ Up with the Jones’

The soap opera that is Louisville Men’s Basketball took on a new episode over the past 48 hours that will certainly leave it’s mark as one of the great head scratchers of all-time.  Less than 24 hours before a road game at ACC rival Syracuse, Head Coach Rick Pitino informed the local media that senior Chris Jones (3rd on the team in scoring/1st in assists/1st in Grammy award-winning flops) was suspended indefinitely and would not play against the Orangemen. Louisville, a team that already labored to put points on the board at times, suddenly became uber vulnerable on Wednesday night with the lose of Jones.  Losing senior leadership always hurts, especially when an alarmingly inexperienced bench (as in this case UofL’s) had at one point gone 2 1/2 games without producing a single point.  Ultimately Jones sat, and Louisville suffered it’s second straight conference loss – a loss that looked to be avoided following a solid first half effort and the play of Montrezl Harrell and homegrown kid Quentin Snider, who played admirably in his first career start at UofL with 13 points and some timely treys.

A quick note regarding Snider: can you imagine the adrenaline rush of having your head coach come to you and inform you that you’d be starting your first ever collegiate game in the next 24 hours, without any prior notice or having been an integral part of first team walkthroughs and knowing that Jim Boehiem’s world reknown match up zone would be waiting for you?

In the end, the actual game last night took an ever so familiar flow: the Cards play a solid 20 minutes, then in the second half find a lid on the basket the size of a Mason jar opening.  Futile offense, untimely turnovers and the inability to keep Syracuse out of the lane and off the charity stripe lead to the ultimate demise.  Coach Pitino harped that he was overly satisfied with the Cards’ play and grit, noting that the NC State loss was far more disappointing to him and his staff.  Then, after answering a few predictable questions pertaining to the suspension of Chris Jones, Pitino did something he rarely does and I, as a life long UofL fan, cannot recall him doing since the fond days of Derrick Caracter and Brandon Bender………….he called out a single player, in this instance rarely used but potential capped freshman Shaqquan Aaron, and stated that the primary reason that Aaron never left the bench Wednesday night was due to him not being a “Louisville Man”.  One could probably scoff at such a statement and/or insert any number of jokes revolving around past instances that tested the time of social morality.  Yet, my initial reaction as a vested fan was two fold…………

1. What could Aaron, a seemingly quiet reserved kid from Seattle, have done to deserve such ridicule?

2. Why does it seem that every year UofL basketball suffers an off the court non-basketball related hiccup that disrupts team momentum, divides the fan base and creates potential road blocks for season ending success?

I would venture to say that most will never really know what Aaron could have done or failed to do to draw Pitino’s ire last night.  Then again, I’m not sure it matters……..unless of course Aaron transfers because of it – at which that point I would consider throwing my iPhone through my living room tv screen.  Bottom line: it is too late in the season for this, spare me as a fan.

Up next for the Cards, Miami in the Yum! Center.  This game could almost be labeled a must win for UofL, if for no other reason to remove the stink in the air.  Oh, and since I began constructing the first half draft of this blog entry, it has been announced that Chris Jones “might” play on Saturday against the Hurricanes and decline a trip to Belgium.  Did someone mention soap opera?

Pull it together Cards, these guys did…. 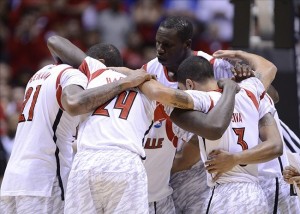