From Outta the Woodwork

Although my UofL/ACC sports blog normally hibernates from the end of college basketball until the start of college football (83 days, but who’s counting?), I have recently encountered something more rare than a Honus Wagner rookie card: some free time. Thus, I wanted to share my thoughts on some items directly related to my beloved alma mater and the league they now fortunately compete in. My last blog was one surrounding utter heartache – discussing the fact that Rick Pitino and his troops were a mere made free throw away from playing in it’s 3rd Final Four in the past four seasons. And, I would be lying if I said that the loss to Michigan State no longer bothered me. It’s so fresh in fact, that last week I began to get semi nauseous just at the site of watching Draymond Green in the NBA playoffs due to his link to the Spartans. But, as they say, time heals all wounds so I should let go of the past and focus on what lies ahead……… Yeah, right.

My first non-basketball related blog topic today revolves around the Louisville Baseball team. To say that Head Coach Dan McDonnell has built the Cardinals into a consistently formidable program would be the understatement of the past century. In it’s inaugural season in the powerful ACC, the Cardinals broke a league record by notching 25 wins. Let that sink in for just a moment, especially when you look back through the years at some of the dominant Fla State, Miami, Clemson et al baseball schools that have comprised the ACC Conference on the diamond. Admittedly, I did not get to see a lot of Louisville’s games this past season due to a lack of tv coverage in my area. But, thanks to the voice of Sean Moth I was able to follow the ride through the airways and listen to some of the bigger games on the Cards’ schedule.

Just a few of the impressive achievements by this year’s Cardinal Nine included a season sweep of Kentucky and a home series sweep of nationally ranked Miami who is currently playing in the College World Series. Series wins over Virginia (also in the CWS) and Florida Stare also beefed up UofL’s seasonal resume. Of course the magical ride finally ended last week in a heartbreaking 11 inning loss to Cal State Fullerton. The Cards had more than their share of chances to advance however, but could not come up with the timely late inning hit and eventually succumbed to an uber game deciding controversial home run that I would still bet my 401K was foul. Nonetheless, a video replay system more archaic than the Atari game system ruled the ball fair…..season over. The final game raked in a school record 6,000+ fans and was the final nail in the coffin towards establishing UofL as a legitimate college baseball power. 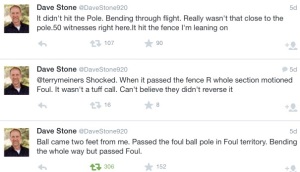 Individually, this UofL team had no shortage of talent. Freshman phenom All-American Brendan McKay was sensational all season both at first base and on the bump. Fellow All-American outfielder Corey Ray was equally as impressive all year with his prowess and pop at the plate. Both players return next season along with a steady class of studs to insure what looks to be another great season. 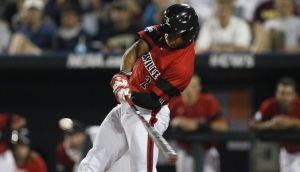 More good news recently came across the wire when stud pitcher Josh Rogers announced via Twitter that he would be returning to UofL for his senior season. Rogers was magnificent in his final outing of the season relegating CSF to a first inning homerun and nothing else afterwards for seven frames. He also put on a trash talking clinic that even Muhammad Ali would have marveled at.

Personally, baseball was probably my favorite sport growing up. But being that Louisville Baseball was never experienced any significant relevance during my younger years, I almost never paid any attention to what the Cards were doing. In a sense, I am admitting to being somewhat of a bandwagon baseball fan at The Ville – at least over the last decade which included Lelo Prado’s final two years at the helm before Tom Jurich hit the jackpot for the millionth time after hiring McDonnell. No matter what, I am more than thrilled and tickled pink that baseball is indeed now alive and well in Louisville at the collegiate level. Moving on from baseball, it should be noted that the Louisville Football program is getting closer and closer to it’s 2015 season opener against the Auburn Tigers and it’s second season in the ACC. I am cautiously optimistic that Bobby Petrino’s second year at the tilt (for a second time) will follow the path of recent history, meaning that the Louisville offense will be much improved as compared to year one. Obviously it’s too early to play the “who will start where” game. But what IS easy to conclude is that Petrino will have plenty of quarterbacks to choose from: one time starter Will Gardner, Battle of the Bluegrass legend Kyle Bolin, Notre Dame game hero and homegrown Reggie Bonnafon, Penn State transfer Tyler Ferguson or four star phenom Lamar Jackson. Pin the tail on the donkey might be the best way to select a starter. Personally, I am hyped to see what Brandon Radcliff can/will do when getting a starter’s load of carries from the running back position.

Although Louisville’s defense took a significant “hit” via graduation and the NFL Draft, it will still have six starters back in addition to some big time difference makers in transfers Josh Harvey-Clemons and DeVonte’ Fields, the former freshmen defensive player of the year from TCU. Oh, and speaking of Fields, the amount of hate and venom that was spewed out by rival fan bases ( I will let you guess which one lead the way) because UofL was offering a scholarship to a “criminal” was hilarious. If you would like to cool the jets of those same rival fans who were shouting from their soap boxes then kindly have them open this link….. http://www.courier-journal.com/story/sports/recruiting/louisville/2015/06/01/devonte-fields-charges-dropped/28322295/ I will most certainly crank back up my blogging hobby once football season nears. There will be more than plenty to discuss when re-examining the Cards from head to toe as well as the rest of the ACC teams. But this entry has come full circle so I will end going back to hoops.

Rick Pitino & Co. got some terrific news just a few days ago when 5-star small forward VJ King verbally committed to the Cards. King is rated by many of the national recruiting services as the #1 SF in the class of 2016. I am by no means Ralph Willard, but after watching numerous videos on him, it is more than apparent that this kid is an all around stud – an instant difference maker. King is the first commit for a class that has potential to page Pitino’s best since hitting the scene in The Ville. The next potential commit to keep an eye out for is five star shooting guard Markelle Fultz who has close ties to assistant coach Kenny Johnson (as did VJ King) so that may ultimately factor in to his decision when deciding on Louisville or Arizona. In the spirit of not putting the horse before the cart, there is still roster movement taking place for THIS year’s basketball team. The Cards recently added a 6’5″ transfer from St. John’s named Jay Henderson who will join the team immediately as a walk-on. The last walk-on to play basketball at UofL w/the last name Henderson stole my head and broke Wichita State’s. Another scholarship is also still up in the air as Coach Pitino and his staff anxiously await to see if top 30 2016 small forward Maverick Rowan (a PITT decommit) will reclassify to this year’s class and then commit to UofL. The Cards look to be the favorite if Rowan does move up in class hut they will have competition from most notably Wisconsin. If they do land Rowan then tge roster could be set for the next two to three seasons almost guaranteeing UofL a shot at a fourth national title.

I sincerely hope everyone within Cardinal Nation has a fun, safe summer. I look forward to blogging again the next time I hear some significant University of Louisville Athletics news or updates. Go Cards!

One thought on “From Outta the Woodwork”