Archive for the tag “big east” 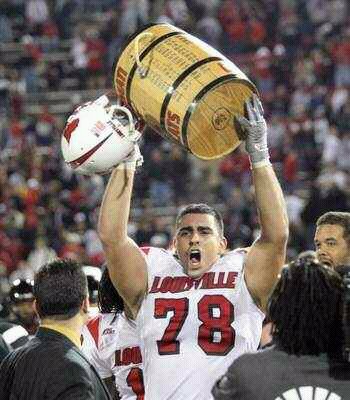 Louisville, Memphis State and Cincinnati have been intwined in a triangle relationship for many decades and through multiple conferences. It’s a rivalry that hasn’t received the same noterity or exposure as Duke and North Carolina or Texas and Oklahoma but it is a rivalry that has brought out the vile from all three fan bases. It is also unique in that it envolves three teams.

END_OF_DOCUMENT_TOKEN_TO_BE_REPLACED

The Louisville, Memphis State, and Cincinnati rivalries have spanned many decades and almost as many conferences. These rivalries, that are underappreciated nationally, hold a special place in the heart s of these three universities and fan bases. It is truly a love/hate relationship;  we love to hate each other.

END_OF_DOCUMENT_TOKEN_TO_BE_REPLACED

Update: Capital One Cup has confirmed that UCLA is the Men’s Winner. See below for the revised final standings.

The College World Series of Baseball is over, and as every good Big Ten fan knows that can only mean one thing: time to hand out the Capital One Cup honors, which is the most important way of measuring a Conference’s success, behind of course how much revenue that conference distributes to its teams.

The official results have not yet come out, however based on the final rankings of College Baseball, we can extrapolate who the winner will be.

So unless there are some other Division 1 National Championships yet to be determined, or unless Professor Dumbledore can hand out special points at the final Capital One Cup banquet, it’s time to crown the winner.

It’s important to note that going into the CWS, the hands on-favorite to win the Capital One Cup was a team that was currently in the top-10 and still in the College World of Series final brackets; namely the Indiana Hoosiers who were tied for 5th place with 76 points and only needed a top-5 final ranking to finish on top of the COC final standings (seriously, the acronym for Capital One Cup is “COC”). So, without further adieu… END_OF_DOCUMENT_TOKEN_TO_BE_REPLACED

Pitt is eliminated after controversial call

English: Logo for the athletics teams at the University of Pittsburgh (Photo credit: Wikipedia)

The Pitt Panthers came up short in their attempt to win the BE baseball tourney on Saturday after a 10 inning 3-2 loss to Notre Dame. With an RPI of 65 the loss leaves Pitt on the bubble for the NCAA tournament. They will now have to wait until Monday for the field to be announced to learn their fait. I believe that a second place finish in the BE should be enough to get them in.

Pitts two losses of the tourney came against Notre Dame with errors at critical moments of the game. A pair of crucial errors help to lead them to a 5-3 defeat in their earlier meeting and Pitt committed 5 errors in Saturdays game.

Pitt looked poised to take the lead in the top of the 9th when they had base-runners on first and second but a controversial call stalled their rally. Notre Dame pitcher Nick McCarty threw the ball to first in an attempt to pick off the runner but the throw went into the first base stands. Both runners took two bases on the error which scored the runner from second and gave Pitt the lead but the umpires told the runners to back up a base, putting runners at second and third instead and taking the run off of the board. Pitt coach Joe Jordano protested but after a meeting from the umpires the call was upheld. The ruling made was that the pitcher threw over to first base while still in contact with the rubber which limited both runners to one base. If he had left the rubber then the runners would have been given two bases each. The first base umpire ruled that the pitcher did disengage the rubber but was over ruled by the third and home plate umpires. Still Pitt was in scoring position with one out but the next batter popped out to third and the following batter struck out to retire the side.

The bottom of the 10th started horribly for Pitt as Evan Oswald booted a ground ball from ND Charlie Markson. This was followed by Dylan Wolsonovich error on a grounder by Frank DeSico which gave ND two base runners with no outs. ND bunted the runners up to second and third and Pitt intentionally walked the next batter to load the bases and to set up a double play possibility. Instead Ryan Bull hit a sharp single to center to score the winning run.

The sixth seeded Notre Dame will take on eighth seeded Connecticut for the championship on Sunday.

Pitt is only 99 days away from their ACC and season opener on Labor Day against Florida State at Heinz Field. This will probably be one of their biggest season openers in recent memory.

If the ACC were to end the football season with a rivalry game, who would best fit that role for Pitt? Virginia Tech? Miami? Boston College? Penn St? Some other team? What are your thoughts?