Archive for the category “Conference News”

The ACC is reportedly dabbling with the idea of a 9-game schedule again.  The idea is to create more conference property, which ESPN can buy–giving all conference members a boost in revenue.  What does the blogosphere think? And what options are there?

As for the Confidential, the position is somewhat different.  Any plan for the current schools needs to reflect the unique scheduling issues facing Florida State, Clemson, Georgia Tech, and Louisville.  Of course, those schools need to realize that Notre Dame is teetering a bit right now and might be obtainable, while ESPN is also pushing the increased inventory argument pretty hard.  The solution?

The Confidential’s Solution is this.

First, here is your schedule:

Second, here are your new divisions:

Third, but, but, but… with unbalanced conference games, how do you decide a league champion?  Simple–based on OVERALL RECORD, rather than conference record.  The top two teams based on OVERALL RECORD play in the ACC Championship Game.  This means that Florida State and Clemson could play in a Championship game if they have the two best records.  Alternatively, it means that any school with a great overall record can get in.  The two teams most in contention for a playoff spot will play each other.

While this lowers the chance of two ACC schools making the playoffs, it increases the chance of at least one school making the playoff.  Is it better for Florida State to beat a 9-3 Coastal team or is it better to take the chance at beating an 11-1 Clemson or 11-1 Notre Dame?  With the Big XII moving to a conference title game, the rematch is guaranteed.  The ACC needs to keep pace to avoid being shut out from time to time.

And who says conference records MUST be more important?  Each conference can decide its champion and championship game members as it sees fit.  Perhaps someday the ACC and SEC will each have 16 schools and can play a complete SEC-ACC challenge in the final week.  If so, all schools can then play the same number of conference games.  But, for now, why not make everyone happy?

Of course, ESPN may “demand” that the ACC add UConn.  If so, then there will be 11 schools outside of the 8-game requirement.  This just means that one school has to join the 8-game ranks every year… rotating, that is one slot every 11 years.  Pretty sure that will not cause a destruction of the model.  Not the end of the world for football, and certainly would not hurt hoops whatsoever.  And if this truly does lead to a profitable ACC Network, it is ALL worth it.

In the meantime, having 10 schools go to 9 conference games, as well as two more Notre Dame games, means a slight increase in inventory.  If UConn is added, even more inventory.  And that is just football alone.  UConn womens’ hoops on the ACC Network?  ACC lacrosse?  ACC baseball?  ACC mens basketball.  You get the drift.  The means to an end are not always pretty.  If this keeps everyone happy, why not?

What do you think of this alternative?

Social media gives every moron–including the moron writing this post–an opportunity to have a public voice.  It is up to everyone else to sift the wheat from the chaff and figure out what to believe or not believe.  At the same time, even a broken clock is right twice a day, while that blind squirrel occasionally finds an acorn.  Long story short… when a rumor is spotted, it can be passed along under the “FWIW” tagline.  So here it goes.

Could have some big news coming from ACC country soon. Should also put to rest any defectors from ACC

Also ACC could be targeting a school that B12 is talking to for expansion. In hearing Uconn but have heard Cincy from others.

I hate swofford but give him his respect.

ACC leadership is what B12 leadership should be. Quick to act and unified

Looking like ESPN is going to invest their B10 $$ into ACC and B12 to keep those brands strong.

If you are an ACC fan, the trinity of accomplishments would be (a) Notre Dame; (b) an ACC Network; and (c) 16-team stability.  So… it is hard NOT to WANT these rumors to have a bit of truth to them.  Are they true?  Who knows?  Time will tell…

Lets Get the Party Started! 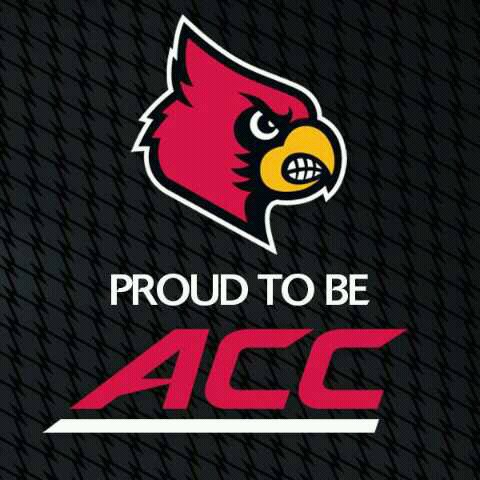 July 1, 2014, the day the impossible has become reality. The Louisville Cardinals year and half worth of anticipation, more like a life time, has come to an end. The University of Louisville Cardinals are now officially a member of the ACC.
END_OF_DOCUMENT_TOKEN_TO_BE_REPLACED

Like Loading...
Posted by lenvillecards in ACC only, Conference News, Conference Realignment, Louisville Correspondent, News, Opinion, Something Positive, This Day in ACC, Today in the ACC and tagged ACC, Cardinals, conference reallignment, louisville, move to ACC

The field of 8 is set in Omaha for the 2014 College World Series. This years field features three teams from the state of Texas, all three from the Big 12. The SEC has two participants while no other conference has more than one.
END_OF_DOCUMENT_TOKEN_TO_BE_REPLACED

After weeks of speculation, and an early leak by ESPN’s Brett McMurphy, the ACC has unveiled their new branding today. The news release and announcement  can be seen here-

END_OF_DOCUMENT_TOKEN_TO_BE_REPLACED

The Tigers Aren’t Finished Yet

Picked to finish 14th in the ACC, Coach Brad Brownell’s Clemson Tigers surprised everyone when they ended the regular season 6th in the conference. Not to mention a season long, star performance by junior forward, K.J. McDaniels who was voted an ACC first team All-American and defensive player of the year.

The Tigers take on Georgia State in Littlejohn Coliseum tonight at 9pm on ESPNU in the first round of the NIT, a postseason honor not all ACC schools can boast about. The ACC is one of the toughest basketball conferences in the nation and you must give credit where credit is due to Brad Brownell. He took the underdogs and made them into competitors that demanded to be taken seriously.

With a heartbreaking overtime loss to Pitt at the end of the regular season, Clemson started the ACC Tournament right with a thrilling overtime win against Georgia Tech, just to be fortunate enough to move on to play Duke in the quarterfinals. What at one point looked like it would be a Blue Devils blowout, the Tigers fought back to bring the game back to within a few points, only to lose by 1 on a controversial call that sent Duke to the next round.

While Clemson won’t be entering “The Big Dance” this March Madness season, they do have a lot to be proud of. Players like Landry Nnoko, Demarcus Harrison, and Jaron Blossomgame improved to become vital assets to the team. Consistent players like K.J. McDaniels and Rod Hall gave another tremendous effort to show that at least one school in South Carolina knows how to play basketball.

This young team should be coming back in full force next season, but might be one short. K.J. McDaniels, while only a junior, is likely to enter the NBA Draft after this season concludes. While I can’t say I blame him, I do hope he’ll consider finishing out his career as a Clemson Tiger and seeing how far he can lead this team next season.

If you haven’t had the chance to watch the Tigers play this season, catch them on ESPNU tonight at 9pm in the first round of the NIT!

If you ignore the absolutely embarrassing performance by the refs, and the reality of what last night’s loss means to Florida State (likely, no NCAA Tournament, barring a run in Greensboro), the end of the UNC-FSU game was a good thing for the ACC. Sure, the game was exciting, seeing the Seminoles lead 21-6 at one point before the Tar Heels stormed back, but that’s not why it will have a significant place in history. No, last night’s game was important because Roy Williams set a major conference record, joining the 300 Club of the ACC.

END_OF_DOCUMENT_TOKEN_TO_BE_REPLACED

The UNC-Duke game, originally scheduled for 9:10pm tonight on ESPN and the ACC Network, has been postponed. Just a few hours before tip-off, the word came out at 5:40pm that the bus that was supposed to pick up the Duke team to take them to the Chapel Hill campus was unable to make it as scheduled. And now, less than an hour after that, officials have announced that the game will be played a week from tomorrow, Thursday, February 20th. The time is still TBD.

END_OF_DOCUMENT_TOKEN_TO_BE_REPLACED

Happy signing day, everyone! Today is one of the most exciting days of the offseason because the future of your favorite team is ceremonially handed off to a group of twenty 17-18 year olds live on ESPN. It’s an important day, because these are the players that can make or break the next four years for your program. A good class can save a coach’s job (we’re looking at you, Mike London), or propel him to a national title in just a few short years (congrats, Jimbo Fisher).

Yesterday, we talked a little bit about one of the topics of this year’s ACC Winter Meetings, the nine game schedule. Today, we’ll briefly look at an issue that’s just as important to the future of the ACC as schedule changes and even your program’s signing class- Divisional Alignment and the ACC Title Game.

END_OF_DOCUMENT_TOKEN_TO_BE_REPLACED

While everyone was caught up in the hype of the Super Bowl (or changing the channel and tuning into Downton Abbey instead), the ACC quietly had their winter meetings at the end of last week. On the agenda? A number of different things that could drastically shape the future of the league. Today, we talk about the return of the nine game conference schedule. Not a lot has been reported regarding the meetings, so this is only discussion and speculation right now.