Archive for the tag “Mike Johnson” 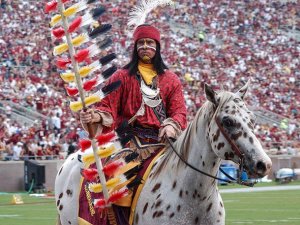 News on the latest with FSU

Search for OC continues:  Ever since James Coley left, Jimbo Fisher has been operating with one less position coach.  Recently, it was rumored that former UCLA OC Mike Johnson was on campus for an interview.  Meanwhile, Tee Martin, current WRs coach at USC, was rumored to be also interviewing for the offensive coordinator position.  There haven’t been many leaks about who’s getting hired, so no one truly knows.  The big question will be whether the person named offensive coordinator is actually going to be the person who calls the plays someday.  Remember, Jimbo still calls the plays at FSU.  He admitted late last year that getting a real OC was part of his 5 year plan.  FSU currently has two former OCs as assistants (Randy Sanders, RB coach and Billy Napier, TE coach).  The wildcard here is that Jimbo promotes one of them to OC and hires an assistant with ties to the Miami area.

Early 2013 rankings:  FSU comes in at 16 according to Schlabach.  Here’s what Schabach had to say:

“The Seminoles underwent a complete facelift after finishing 12-2 last season. Coach Jimbo Fisher lost six assistants from his staff, including defensive coordinator Mark Stoops (Kentucky’s new coach) and offensive coordinator James Coley (same position at Miami). Fisher hired former Alabama assistant Jeremy Pruitt as his defensive coordinator and has yet to hire an offensive coordinator, although Fisher will probably continue to call FSU’s plays. Despite the staff overhaul, Fisher was able to bring in the country’s ninth-best recruiting class, which included No. 4 cornerback Jalen Ramsey, No. 5 defensive tackle DeMarcus Walker and No. 10 outside linebacker Matthew Thomas. The Seminoles will spend the spring looking for a new quarterback after losing EJ Manuel, who won four bowl games. They’ll also have to rebuild their defensive line, especially after star end Bjoern Werner left for the NFL draft.”

He’s spot on.  It’s a rebuild.  New coaches, new QB, new players on defense and new scheme.  Meanwhile, Clemson clocks in at 11.  It’s absolutely imperative for the ACC to have two top 20 teams.  At a minimum.

Recruiting:  This week, Rivals published its list of best recruiters.  Topping the list is Mike Groh at Alabama, but 2 FSU coaches made the list: Jeremy Pruitt and Odell Haggins.  The funny thing about Pruitt is that he was only on the staff for a month.  But he was able to pull a top 5 DE, CB and then brought in a few sleepers he evaluated himself.  Not bad work.  Odell, meanwhile, is the most underrated FSU coach has.  Looking around the ACC, Clemson’s Venables got props as a top recruiter, but so did Mike Locksley at Maryland.  Maryland absolutely killed it in this class…

Speaking of recruiting, Noles 247 released an article this week about the recruitment of Matthew Thomas.  I’m not sure what’s worse; that he said he would have gone to USC if his mom signed the LOI or that Denver Kirkland would have gone to FSU if Thomas told him he was going.

ACC Woes:  Warchant.com released an article this week about FSU’s major loss… to the tune of $478,000 for showing up to the ACC Championship Game.  How does this happen?  There’s only one answer in my book: hold conference championships at the “home” team’s field.  Obviously, come up with a revenue sharing strategy, but I know how the ACC could have sold 82,000 tickets and given both FSU and GT real money for having played in the ACC Championship Game.  It’s an easy fix.

A blurb on basketball:  I’ve been meaning to write about FSU’s squad this year.  Truth be told, they were green going into the year and then all hell broke loose with injuries.  It has been a tough year to watch.  They lost a battle against UM this week and took them to the wire.  Today, FSU plays BC today in Boston.  A win could go a long way to saving the season and building momentum.  Of course, while this season may be lost while we rebuild, next year will be great with Andrew Wiggins.