A Letter To Santa

As much as it pains me to say, please disregard my previous letter asking for $1,000,000 and Luke Kuechly to be my boyfriend; instead I’d like to make a more selfless request.

This Christmas, I’d like it if you and your elves could conjure up a Clemson win this post season. It would really mean a lot to me, my family, and the rest of the Clemson faithful. I’m sure you’ve gotten plenty of letters from Buckeye fans, Gamecock fans, and Jesse Palmer, asking for a Clemson loss, but I really hope you’ll consider my request. Here are some cold hard facts as to why you should give me what I want grant my wish:

1. I’ve been good this year—I graduated and became a proud Clemson alumni, joined IPTAY to show my support for Clemson athletes, and I continue to pay my student loans on time (Joy to the World!)

2. It’s Tajh Boyd’s last game—Tajh has been a true blessing to the Clemson program and I’d really hate to see him go out on a sour note. Breaking all kinds of ACC and school records, he will go down as one of, if not the best quarterback in Clemson history. This win could be the cherry on top to an already outstanding career.

3. You look really good in Orange—Look! Seriously, you’re killin’ it. 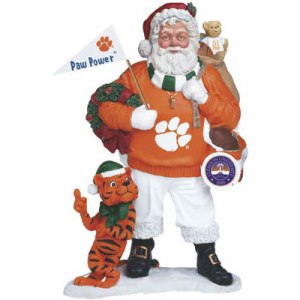 4.  Last time Clemson played Ohio State we didn’t punch anyone—this is a no brainer. Last time we played the Buckeyes it was 1978. Their coach literally grabbed Clemson middle linebacker, Charlie Bauman, and punched him through the facemask after he caught an interception. Shouldn’t they be punished? 36 years later. Sure the coach was fired, but I still feel like the whole team hasn’t fully felt those repercussions.

5.  Finally, Clemson doesn’t just need this win, the entire ACC needs it—please consider this selfless request not only on the behalf of my Clemson Tigers, but on the rest of the ACC as well. Try as we might to become a strong football conference, it just hasn’t happened yet. With a Clemson win, you’d be showing the nation that the ACC can produce teams that win…even without that SEC speed.

Merry Christmas and I’ll be looking for you on Santa tracker.

3 thoughts on “A Letter To Santa”