Syracuse Back on Winning Track

One of the great things about all sports is that the result unfolds in front of you.  It is not an episode of… let’s just say… Law and Order… where there is an ending pre-written and you just wonder where someone has pre-ordained your emotions to go.  No, when it is 8:50 p.m. for a game that starts at 7:00 p.m., the ending remains unknown.  Unless, of course, one team has a lead that is insurmountable.  Even then, however, there is still the potential for a “moment.”  Each season will have some close games.  The 2013-2014 edition of Syracuse basketball is seemingly only close games.  Last night kept that streak of nailbiters, alive, with Syracuse returning to its winning ways, defeating Maryland 57-55.

Last night’s game was not always destined to be close.  Maryland committed 18 turnovers, some of them comical.  But, playing without Jerami Grant in the second-half, Syracuse’s offense became very perimeter oriented–settling for jump shots.  Conversely, in foul trouble, Maryland attacked a bit more often, leading to a significant foul (19-13) and free throw (27-6) disparity that helped keep the game close.

Oddly, despite the significant edge in “whistles,” Maryland coach Mark Turgeon was disappointed that a foul was not called on Syracuse in the final seconds, putting himself very deeply onto the floor without receiving a technical: 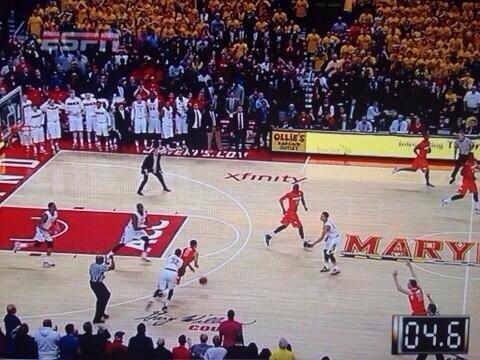 In any event, sometimes you get the calls, sometimes you do not.  Even within a game.  You cannot commit 18 turnovers and blame the result on the referees, especially when you get 20+ free throws.

For Syracuse, it is back to winning.  Short-handed and on-the-road, Syracuse kept up its end of the bargain for its fans with another hard-fought, close victory.  A well-deserved four day break awaits, followed by a tough road game against Virginia.

Posted by acaffrey in Basketball, Results and tagged Maryland, on the court, result, Syracuse, turgeon