The Realignment Fallout of the Proposed College Football Union

You may not know it, but one of the biggest days in college football history is quickly approaching. No, not the spring signing period, although that was pretty exciting. No, not the inaugural College Football Playoff either, that’s practically a whole year away. Imagine something greater. Something more far-reaching. That’s next Friday.

On April 25th, the Northwestern football team will vote on whether they will officially unionize. In order for the effort to pass, a majority of secret votes must come to a consensus. It’s tough to say what will happen, even though we’re only one week out. The University has pledged to fight every effort while opening a dialogue with players about their needs. Players have called for a drastic change in the economics of the NCAA. What’s the best solution? It’s anyone’s guess.

But the purpose of this article isn’t to discuss the pros and cons of such an arrangement. That topic has been beaten into the ground already. It’s more of a ‘what if,’ full of countless speculation. So WHAT IF the measure passes? WHAT IF college football players can unionize? Will schools be able to meet the players’ demands? Will we see a strike in the future? Or will schools that can’t keep up simply drop out of Division I altogether?

Now, this particular ruling would only applying to private schools so that’s something important to keep in mind. Programs like Alabama and Florida State wouldn’t be immediately affected. Now, imagine that the union is approved. Despite the players’ insistence that athletic programs make a ton of money (theoretically, they don’t- the quarterback can take it up with the rowing team), smaller universities are pushed out of big-time football by this ruling. For simplicity’s sake, let’s just say ALL private schools except for Notre Dame are gone.

That’s huge. The Atlantic Coast Conference alone contains 7 private, or semi-private universities (Boston College, Duke, Miami, Notre Dame, Pittsburgh, Syracuse, Wake Forest). With private schools dropping major college football, realignment, everyone’s favorite hot topic, would be inevitable. Just out of curiosity’s sake, I decided to figure out what this might look like. Yes, there are some schools involved that are not considered to be top tier right now (New Mexico, Colorado State, etc.), and there are others that are big time programs that are not included (Miami, Stanford, etc.), but that’s just how it goes. For simplicity’s sake, let’s just assume that the break is clean- public schools are IN, private schools are OUT. 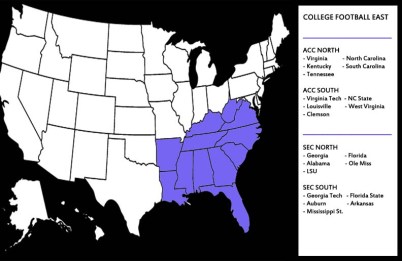 This really isn’t wildly different from what we have now and it actually makes a whole lot of sense. While, Kentucky, South Carolina and Tennessee have swapped their SEC affiliation for one with the ACC, and Georgia Tech and Florida State have taken their place in the SEC (West Virginia returns to the East Coast where they belong), divisions include close geographic partners and logical rivals. Each season would consist of a 9-game conference schedule, with each team playing within their division (either the ACC, or SEC). The winner of each division would face off with the winner of the other division within their conference (ex) ACC North vs. ACC South), then play the winner of the opposing conference (ex) ACC South vs. SEC North). The winner of that game would ultimately be the winner of College Football East and join the winners of College Football West and North in the ‘Final Four.’ Since there are only three conferences, the final slot would be filled by an at-large team.

As a resident of North Carolina, this set-up makes me excited. Do I miss the annual games against teams like Duke and Wake Forest? Of course not! There would still be 3 out of conference games to fill. The Blue Devils, Demon Deacons and East Carolina could fill up our schedule nicely each year. College Football East is geographically sensible, maintains natural rivalries and is entirely plausible under the ‘union’ scenario, or even a major SEC expansion to 20 (which would be similar if Florida State, Georgia Tech, Clemson, NC State, North Carolina and Virginia Tech joined). 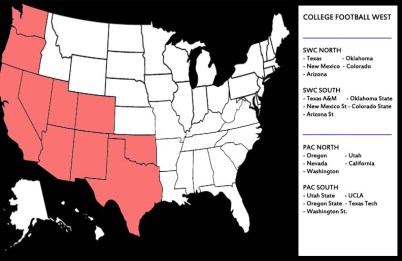 Sure, this is a little more of a stretch, but a lot of great teams out west ARE private schools so concessions had to be made. Stanford is gone. BYU is gone. Even Southern California is gone (which is hard to believe). Keeping that in mind, we again have compact divisions that make perfect sense. Close, geographic rivals, easy travel, exciting matchups. The only real outlier is Texas Tech which got the short end of the stick being the ‘third’ program out of Texas’ public school group. Some things can’t be helped. Regardless, College Football West is still a formidable group, featuring regular heavyweights and setting up exciting playoff matchups (imagine a SWC North- Texas vs. a PAC North- Oregon in the College Football West final? Priceless).

Yes, that is Maryland up there with all those Big Ten schools. Why not? That’s where they apparently want to be. The set-up of College Football North preserves a lot of your traditional Midwestern rivalries. Ohio State-Michigan is still there. Kansas-Missouri is still there. Even Maryland-Rutgers. Oh wait, no one wants to see that. But like the other two conferences, it’s not quite perfect, but easily imagined in a new era of college football. If we’re moving towards an official NFL feeder league model, and that seems to be the case no matter how slowly it comes about, then these divisions would be high on the list.

So there you have it. The hypothetical college football landscape of the future. It’s not perfect, but in a day when anything is imaginable, you have to think that it’s a strong possibility. The repercussions would be enormous and the change big, but that seems to be what the players are going for. What do you think? Do you agree with the divisions? Disagree? Are you concerned about where your favorite team would fit into this brave new world? Leave your thoughts in the replies.