Pretend for just a few minutes that you are Rick Pitino.  You have nine seconds left in your season’s last home game – Senior Night to boot.  Your team has played it’s best collective 39+ minutes of the season and is on the brink of knocking off the 2nd ranked team in the country and regular season ACC Champs in the Virginia Cavaliers.  An ear deafening crowd of 23K red clad UofL fans is going berserk.  So, the pressure indirectly now lies on you as the Hall of Fame head coach to make the right call. What are you as the acting head coach going to draw up?  A predictable yet potentially successful entry pass to Montrezl Harrell?  A double stagger screen for Wayne Blackshear?  Or, spread the floor for Terry Rozier to get to the rack and draw a foul or get the “and one”? Answer: none of the above (of course) In reality, I have no idea what exact play Pitino scripted but I have no doubt that every Card fan from here to China was hoping and praying that Mangok Mathiang, who had made 1 of his last 16 FG attempts before Louisville inbounded the ball, would be the guy the Cards would lean on.  There were no other legitimate options right?

Shamefully, I admit to internally cursing out loud as soon as the ball left Mangok Mathiang’s hands last night.  And I think other Louisville fans would be lying if they too didn’t feel immediate angst when he pulled the trigger.  But it matters not, as the bottom line was that Mango DID can the jumper, shot it like he meant it and had the onions to let it fly instead of caving in to the pressure packed moment.  As shocked as I was after the bucket, I think Virginia’s players were even more baffled.  It stands to reason that Mathiang was never even mentioned on UVA’s pre game scouting report.  So moving forward what does Mango’s big shot mean in the big picture?  For starters, it locked in Louisville as the #4 seed (over N. Carolina) in this week’s ACC Conference Tournament where they will have a double bye.  Secondly, the win serves as a very nice resume’ builder for the Cards in terms of their overall seeding in the NCAA Tournament in two weeks.  Last, but certainly not least it sent Wayne Blackshear and Montrezl Harrell (NBA bound junior) out winners on Senior Night. * Interesting factoid: Louisville is now 13-1 in the last 14 years on Senior Night The body of the  game against Virginia itself was one of the more entertaining ones I had watched all season.  The Cavaliers, even without starter Justin Anderson, showed America via ESPN just why they are ranked #2 in the country – they can flat out play some defense.  Additionally, Virginia isn’t too shabby on offense either but the recent defensive schemed tweak by Coach Pitino and the overall play of Montrezl Harrell and the timely big buckets late in the second half by Blackshear and Terry Rozier proved to be just enough to put Mango in the spotlight where he finished the deal.  As a side note, the play of freshman point guard Quentin Snider should not go overlooked as he was key for UofL in the first half canning 3 treys from behind the arc. Unable to attend the game personally, I was proud of the crowd at the Yum! Center.  They were loud and engaged from the opening tip, at times so thunderous they drowned out Dick Vitale which is never a bad thing.  Those in attendance Saturday were no doubt a big boost to the players and staff – a true home court advantage. Looking ahead, the Cards go back to practice and play the waiting game.  The bracket for this week’s conference tournament looks like this…… 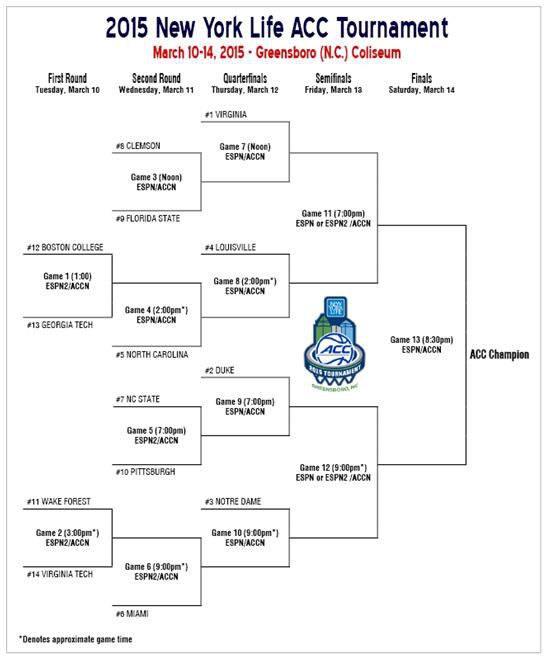 So upon further review, all UofL has to do to win their first inaugural ACC tourney is to hypothetically beat North Carolina followed potentially by two #1 NCAA Tournament seeds in Virginia and Duke.  Piece of cake right? I don’t know much, but I do know this:  Saturday’s big win over a terrific opponent does reinstall some confidence for Cards fans that this team can make some noise in The Big Dance.  Do they still have deficiencies?  Oh, yes.  But do they appear like a tighter knit group with better chemistry and energy that is having fun playing?  They definitely do.  Here’s to hoping that this group continues to pass the ball well, opening up more jump shots which, as of late, have been dropping. Greensboro, NC may not be Madison Square Garden, but it’s the next step for the Cards and one that will be exciting to watch.  Whoever said that Christmas was the most wonderful time of the year was obviously wrong – it’s March.  Enjoy the hoops folks!