If the Cards had not jumped off sides inside the last minute of regulation…….

If Verne Lundquist knew the pronunciation 1/2 of UofL’s roster even w/a cheat sheet (Bobby Vetrino is the man!)…….

If pigs could fly……

As a Cardinal fan one could only lament the “what ifs” until the cows came home following Saturday’s 31-24 loss to Auburn in the Georgia Dome this past Saturday. The game featured a dominant Auburn performance in the first half (at least on the scoreboard) followed by a second half that showcased a completely different Lousville team, most notably due to the quarterback play of true freshman Lamar Jackson. 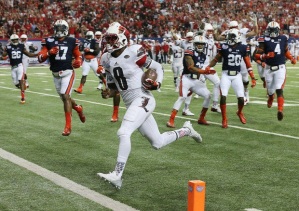 In the end it was Louisville’s inability to refrain from self-inflicted wounds that caused their demise. And the wound that caused the most damage was an untimely fumble late in the first half that directly lead to an 85 yard fumble recovery leading to an Auburn touchdown. In addition to the fumble, the Cards did themselves no favors either by getting cute on the opening offensive play of the game and coughing up an easy interception that gave the Tigers great field position on Louisville’s side of the 50. Shortly later, Auburn marched in for a relatively easy score against a defense that started out playing on it’s heels. And to be honest, after UofL went on to miss a short field goal and cough up 10 more points, I was beginning to think along the lines of……..

But then there was the second half and the birth of a potential future phenom in Jacskon………..

This may sound cliche and I have heard it muttered by a handful of other UofL fans that I communicate with almost daily, but I am not sure if I have ever felt more positive about a Louisville Football loss in recent memory post Saturday. Sure, I was optimistic back in 2004 when an underdog UofL squad lost a heartbreaker to Miami 41-38 (screw you Devin Hester) because the Cards, despite loss, had garnered some national respect and found some positives that would help drive the engine toward a successful season climaxing in a bowl win over a nationally ranked Boise State team. Saturday’s game left me feeling the same way although at this point UofL has already gained and solidified respect from the media and fans alike.

So, despite a solid second half showing on Saturday, where does this UofL team go from here? My prediction: up. Just minutes before typing this very sentence, Lamar Jackson was officially named the starting QB for Saturday’s home opener against offensive juggernaut Houston. Personally, I love the decision to hand over the keys to the car to Jackson. His elusiveness and ability to make things happen make him a dangerous commodity under center. Nothing against Reggie Bonnafon, who despite being pulled after halftime, played a fairly solid game. His demise would be the inability to thrown the ball away when under attack and costing his team valuable yardage. Nonetheless, the team is clearly now Jackson’s to run with plenty of insurance policies to back him up. Both Will Gardner, who I idiotically picked to start against Auburn, and Kyle Bolin have big game experience. Gardner played terrific last year in helping the Cards destroy Miami in their first ever ACC conference game. Bolin, who became a legend after slaying in-state rival Kentucky last November is also at the ready. All that to say, I would still look for Bonnafon to get some snaps. The kid has shown that he can play (see Notre Dame) and I still think he can provide something of value to Petrino and his staff.

Speaking of value, the uber young group of wide receivers for the Cards immensely impressed me against Auburn. I was blown away at the way Jaylen Smith, Devonte Peete and Traveon Samuel played. Each made some very nice catches on Saturday. As a fan there is nothing more reassuring than watching true freshmen make big plays in a key game against top 10 competition. Once James Quick, who thankfully will not be out for the season following a severe high ankle sprain in the 4th quarter, gets back to full strength this receiving corps is going to hard to slow down. Guys like Javonte Bagley and Jamari Staples (out against Auburn due to injury) have not even cracked the stat sheet yet but will be expected to. Safe to say, the receiving position(s) is in very good hands (pun intended) for the foreseeable future. 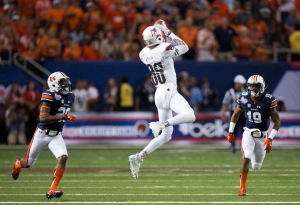 Defensively, I came away very impressed with UofL’s game plan and strategy on Saturday. Josh Harvey-Clemons was terrific in the backfield recording two interceptions. Shaq Wiggins established himself early in the ball game with his air right man to man pressure at the corner position and was hardly thrown at after the first quarter. Sheldon Rankins, who I still predict to have a monster season, was quiet on the stat sheet Saturday but after watching the game a second time you could see that he drew numerous double teams and was cleary a primary focus of Auburn’s offensive line. My hope is that Devante Fields gets it going this weekend as he showed glimpses of being a total defensive nuisance late in the game on Saturday.

One last look at the Auburn game tells me two things…….

Up next for the Cards is Houston. The Cougars are coming off a 52-24 trouncing of Tennesse Tech. I don’t look for Houston to put that many points on the board again this weekend, not half that many in fact. I also look for the Cards to establish their running game with Brandon Radcliff, Jeremy Smith and LJ Scott early and often taking some pressure off Jackson. My hope is that the fan base will be in their seats early and will get loud. Home openers at PJCS in years passed have been terrific. I expect nothing different this year. Go Cards!

One thought on “What If?”