Look, the time has come for the NFL to begin thinking about its next commissioner.  The embattled Roger Goodell is losing public support rampantly, and the NFL now has to investigate itself.  This cannot end well.  It is just a matter of time before the NFL begins looking for its next NFL commissioner.  And the Confidential thinks that the NFL should consider Greg “GERG” Robinson.  Consider…

First, you know how it goes with coaches.  When you have a coach that is too heavy on discipline, the next coach must be a “player’s coach.”  And when you have a “player’s coach” for too long, the next coach must be a disciplinarian.  Well, until Roger Goodell decided to go easy on Ray Rice, there was no greater disciplinarian.  In fact, this is part of the reason that many of the NFL players are not supporting Goodell.  Goodell simply cannot discipline properly–either being too severe or too lenient… usually too severe.  So let’s get someone who is a lot less strict…. Greg Robinson.

I mean, what kind of punishment would GERG hand out? 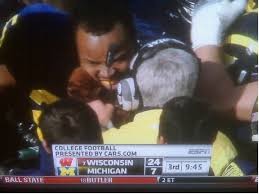 Please, compared to a one-year suspension, this is exactly what the NFLPA would like to see in its commissioner.

Second, GERG has two Super Bowl rings.  Nothing says legitimacy like success at the highest level.

C’mon.  Compare GERG to other coaches with a same or greater number of Super Bowl wins:

Don’t see him wearing a suit.

White guy with mustache = no chance.  None of these guys stand up to GERG in terms of appearance.

Finally, there really isn’t anyone else that is more worthy of being the next NFL commissioner than GERG.

Tony Dungy for NFL Commissioner! Super Bowl win as a head coach.  Impeccable class and character.  Respect of the players.

(hey, at least you didn’t get fired)